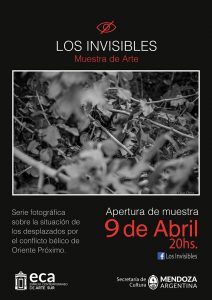 “Los Invisibles” consist of a series of pictures  that portray the situation of the refugees because of the Middle East warlike conflict.

Framed in the greatest humanitarian catastrophe of the last decades, the image is approached from a sensitive plane, emphasizing the expressiveness of the eyes, extracting fragments of the daily life of people who struggle every day to preserve their dignity, before the indifference of a World that makes them invisible.

DO YOU WANT TO HELP US?

Join our association with just 1€/month and collaborate with us.